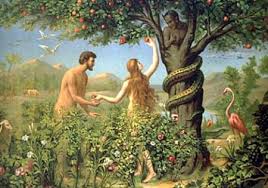 Genesis 3 narrates a sad story because it describes the fall of man due to sin and his separation from God.

In the first verse of Genesis Chapter 3, two characters are presented to the reader; the serpent and the woman. In actual fact, there is a 3rd character who is even more mischievous than the serpent; Satan. In truth, there is nothing scary about the serpent. It (the serpent) was just a medium that Satan used to reach the woman. The very wise Satan knew that there was no way that the woman would hold a conversation with him. Therefore he used something that Eve would have no problem talking to- the serpent.

One may argue that the serpent was subtle and crafty that is why Satan used it. However, it was given these attributes by virtue of its ability to deceive man to sin. Nevertheless, we should not forget that the brainwork and architecture behind the plan to cause the fall of man was Satan himself. The serpent was only guilty of something that it could not control- becoming the vessel that Satan used. The serpent, an animal is nothing compared to humans in terms of intelligence and status. Satan is able to use humans as vessels: In Matthew 16:22,23, Satan easily used Peter, a disciple of Christ as a medium to communicate to Jesus. When Jesus said “Get thee behind me,Satan” (Matthew 16:23), He was indeed talking to Satan. He was not calling Peter Satan.

So think about this; if Satan can easily use humans who are created in the image of God as vessels, how much more a mere snake? He could have used any other animal as his vessel. The snake was used because of its proximity to Eve at the time or because of its high intelligence compared to the other animals. Whatever it was, Satan knew that using the snake would raise no suspicions in Eve’s mind; and it worked!

How was Eve able to communicate with the snake? Some believe that Satan gave the snake the ability to talk. If that was the case, the awkwardness of the situation (a talking snake) would have raised red flags in Eve’s mind. This means that this form of communication between man and beast was normal. Adam and Eve were able to understand the language of each animal and were able to talk to them. This is not frightening; animal research has proven that almost all forms of animals communicate with themselves in one way or the other. We are able to talk to our pets in our languages and they understand us.  Our parents (Adam and Eve) were able to also understand them.

AWAY FROM THE MAN: Many Christians tend to blame Adam for not being with Eve when she was tempted. It is true that if Adam was there, he would have rebuked the snake and redeemed the situation. However, it is practically impossible for Adam to be with Eve all the time, just as it is impossible for husbands and wives to be together at the same place all the time. Although Adam and his wife were together most of the time, the very patient Satan waited until there was a physical separation to reach the most vulnerable of the two. The problem here was not the separation but the willingness to chose to believe Satan instead of God.

SATAN’S DECEIT: Satan started his conversation with Eve with a question that was twisted from the truth: “Did God really say ‘you must not eat from any tree in the garden’?”. Eve responded by stating the correct command from God.  Then Satan made three statements:

Many christians believe that everything Satan said to Eve was a lie. But do you know that two out of his three statements were true? The first statement was a blatant lie. God Himself had said to Adam that the day that they eat off the tree, they would die. However, Satan’s next two statements were true:

It was therefore with an outstanding craftiness that Satan presented his deceit to Eve. He used a mixture of truth and lies; more truth than lies. By such doing, the truth disguised the lies. He employs this same model of deceit in his approach to humankind today. A lot of time, we excuse the lies because of the savor of the truth, forgetting that these lies are the poison that eventually kill us. 99% water with 1% poison is still deadly. 99% truth with 1% lies is still deadly. Children of God ought to uphold absolute truth, extending no tolerance towards a single iota of lie.

TRANSFER OF DOMINION: Going back two chapters to the creation of man, God gave him dominion over all things on earth, including the earth itself (Genesis 1:26). When God questioned Adam about eating the forbidden fruit, he quickly blamed the woman for making him eat it. By this act of shifting his responsibility to the woman, he transferred his dominion to the woman. So God turned to the woman to question her but she also shifted the responsibility to the serpent (Satan). Therefore, she also transferred the dominion over the earth to Satan, who has now become the prince of the earth (John 12:31). A lot more was happening than the human mind could perceive. Notice that God questioned both Adam and Eve for their actions but he did not question Satan. This is because Adam and Eve were God’s children but Satan wasn’t (anymore).

THE PUNISHMENT: God first pronounced a curse on the snake for being the instrument that Satan used to deceive Eve. It will crawl on its belly and eat dust. The snake did not go scot-free for its contribution to the fall of man. The punishment in Genesis 3:14 was solely for the snake.

God also said that “I will put enmity between you and the woman” (Genesis 3:15). Many Christians believe that God made this statement to the serpent. Contrary to this popular belief, God was talking to Satan, not the serpent: “And I will put enmity between thee and the woman, and between thy seed and her seed; it shall bruise thy head and thou shalt bruise his hell” (Genesis 3:15). From this prophesy arose hope for the fallen humanity upon which the children of God clung from Adam to the first advent of Christ. Indeed, on the cross, the Son of Man suffered a bruise to his heel but His victory over death was a deadly bruise to the head of Satan.

The woman will give birth in sorrow, the man will eat out of the sweat of his face, but what is this statement?: “And thy desire shall be to thy husband, and he shall rule over thee” (Genesis 3:16). Unfortunately, this verse does not imply that the woman’s desire will be to love her husband- that would have been an awesome punishment! It means that the woman will desire her husband’s position and power. Why? Because the man gave the woman this dominion. However, God reinstated the order of things: the man will rule over the woman. The man is supposed to be the head of the family, and not the woman. This is how God made it.

The second curse that God pronounced was uttered out of undiluted love. “Curse is the ground for thy sake” (Genesis 3:17). Man had to till the ground to eat. The ground had to suffer damages so that humans could survive.

THE RETURN TO THE GROUND: The saddest and gravest punishment was the proclamation of death: “For dust thou art and unto dust shalt thou return” (Genesis 3:19). At this moment, the immortal son of God (Adam) had become mortal. The perfect body was no more perfect. The human cells began to wax weak and die, and new cells began to replace dead cells. DNA started becoming shorter with each replication. The human body was on a countdown to total decay.

But why didn’t Adam and Eve die on that day? God Himself had said to Adam. “For in the day that thou eatest thereof thou shall surely die” (Genesis 2:17). Well, somebody died on that day in Adam’s stead. In the 23rd verse of our chapter of discussion, God clothed Adam and Eve with coats of skin. A lamb had to die and its skin was used to clothe Adam and Eve. More importantly, its life was given in exchange for their life so that they did not have to die on that day. The lamb died their death. This was the first sacrifice ever- offered by God, Himself. The blood of this sacrificial lamb served temporarily for the remission of sin because “without shedding of blood is no remission” (Hebrews 9:22). This sacrifice alluded to Christ’s sacrifice on the cross 4000 years later. However, Jesus’s blood will have the power to wipe sin away forever.

CHANGE OF CLOTHES: Adam and Eve transitioned between three types of clothes; nakedness, fig leaves, and animal skin. You may ask “How is nakedness a type of cloth?” In Genesis 2:25, “They were naked, the man and his wife, and were not ashamed.” Why were they not ashamed? It wasn’t because their eyes were not opened yet. It was rather because they were clothed with the righteousness of God. When they sinned, this robe of God’s righteousness was taken off and they saw their nakedness. Both the fig leaves and the animal skin protected the outer body but the robe of God’s righteousness gave protection to both the body and the soul. Christ offers us this robe of His righteousness on a daily basis. It is important that we wear such robe because it is our guarantee to eternal life. In the new heaven and the new earth, the children of God will wear the robe of His righteousness.

THE SEPARATION: Adam and Eve were driven out of Eden. This marked the separation between father and son, and between the creator and the created. This is a sad story because prior to their disobedience, God Himself came to the garden of Eden and communed with Adam and Eve. They had the opportunity to see God. But with the emergence of sin came separation also, and now Adam and Eve were ejected from their home.

Adam and Eve could see both the Cherubim and the flaming sword that turned in all directions. This means that they could see into the fourth dimension and it took a while before they could no more see into this dimension.

Genesis chapter 3 indeed recounts a sad story; the fall of man and a broken-hearted God. It also recounts the transfer of dominion from man to Satan. However, amidst these broken lines is a glorious hope of restoration to righteousness and a reunion between God and man.