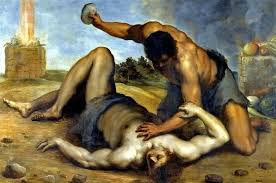 In this chapter, we witness sin reaching its climax; murder. The gravity of Cain’s sin of murdering Abel surpasses his parents’ sin of eating the forbidden fruit. However, at the sight of Abel’s body, Adam and Eve could not help but take the blame for the calamity that they had brought on humankind through their disobedience to God.

Genesis chapter 4 tells more story than we can read. As introduction, the narrator introduces Cain and Abel as Adam’s first two children. An important line in verse 3 is “And in the process of time…”. This line suggests that it took a long time before Cain and Abel brought their offerings to God. Within this “process of time”, Adam and Eve gave birth to other children. These children grew up, left the presence of God and built cities of their own. It was Cain and Abel, Adams first two children who chose to stay with their parents to worship God. The “process of time” mentioned in verse 3 was long enough for multiple cities to be built. However, it was less than 130 years because Adam was 130 years when he gave birth to Seth; and at this time, Abel had already been killed.

THE OFFERING: God asked Cain and Abel to bring offerings to Him. Cain, a tiller of the ground, brought crops as offering to God while Abel, a shepherd, brought the firstlings of his flock. God must have instructed the two brothers what exactly to use for the offerings. Cain defiled God’s commands by bringing crops as offerings instead of animals. It is for this reason that God rejected his offerings. Cain had the opportunity to repent and do the right thing. God clearly warned him that “sin was crouching at the door” (Genesis 4:7) and its desire was to have him (Cain) but he should overcome it.

The fact that God had this open conversation with Cain suggests that Adam and his children were able to communicate with God. They could not see Him (lest they die), but they could hear Him. After Cain killed Abel, God cursed him. Cain was the first human that God cursed. God cursed the snake, He cursed the ground for Adam’s sake, but this time, Cain had done the unthinkable and for the first time in human history, a human was cursed by God.

The frightened Cain pleaded with God that considering what he had done (killing Abel), anyone who finds him would kill him. The merciful God put a mark on Cain so that no-one would kill him. This mark was for Cain’s protection. That is why when Lamech, Cain’s descendant killed him, he received Cain’s curse seven times.

One important point to establish is the fact that Adam’s children married among themselves. Cain’s wife was absolutely a descendant of Adam. Cain’s genealogy is mentioned in this chapter. But no numerical value is given to their ages.

Until Seth was born, all of Adam’s children had moved from the presence of God, excepted for Abel who had been killed. However, Seth was significant because from Seth’s family line, “men began to call upon the name of the LORD” (Genesis 4:26). Seth worshipped God and was adopted by God. He became God’s son, just like his father, Adam.