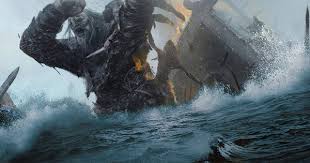 The first three verses of this chapter is worth discussing. The sons of God saw the daughters of men that they were beautiful and took them for wives and gave birth to giants and people of great intelligence. These verses have been misinterpreted by many Christians. Many believe that these sons of God were angels who came to the earth and married humans. That is far from the truth! Jesus Himself has made the bold statement that angels do not procreate. He said “At the resurrection, people will neither marry nor be given in marriage; they will be like the angels in heaven” (Mathew 22:30). Therefore after resurrection, we will not marry nor give birth, just like the angels in heaven. The sons of God mentioned in Genesis 6:2 are not angels.

The problem with the sons of God mating with the daughters of men was not the genetic contribution to the offsprings but rather the emergence of sin in the sons of God. The descendants of Seth started to reject God and His laws, and this resulted to sin upsurging to heaven so that God regretted that he had made man and His heart was filled with pain (Genesis 6:6). The sons of God intermarrying with the daughters of God ended up hurting them because they started to disregard Jehovah and His laws. It was for this same reason why God forbade the Israelites from intermarrying with gentiles; because if they did so, they would start worshipping the gods of the gentiles and reject Jehovah. We become sons and daughters of God when we accept Him by accepting Jesus as our personal savior. When that becomes the case, it is important to associate with people of similar faith and marry partners who choose Christ over sin so that through our marriage, we may not be drawn apart from our God.

Unfortunately, only Noah, his wife, his three sons and their wives chose to follow Jehovah. God was going to destroy sin and the people infested by sin with it. Noah was given a task to warn them for 120 years. At the same time, he built the arc. God said to Noah “But I will establish my covenant with you, and you will enter the arc- you and your sons and your wife and your sons wives with you” (Genesis 6:18). Noah was given the opportunity to become the person through whose bloodline the Messiah would be revealed to the earth. God’s very first covenant was made with Noah. Through Noah's faithfulness to Jehovah, the entire human race would not be wiped off the earth.