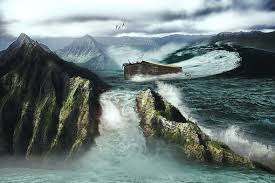 Genesis chapter 7 is one of the most significant chapters in the Bible. The story in this chapter is important because for one, except for the faithfulness of Noah and his family the human race would have been wiped off the face of the earth. “The LORD then said to Noah, ‘Go into the ark, you and your whole family, because I have found you righteous in this generation’” (Genesis 7:1-NIV). Through their intermarriage with the children of man, the descendants of Seth who were the children of God had embraced carnality and sin. Only Noah, his wife, his three sons and their wives proclaimed the name of the LORD. And for that reason, they were saved from the flood.

God made specific instructions to Noah about the animals that he was to bring into the arc. “Take with you seven pairs of every kind of clean animal, a male and its mate, and one pair of every kind of unclean animal, a male and its mate,  and also seven pairs of every kind of  bird, male and female, to keep their various kinds alive throughout the earth” (Genesis 7:2,3-NIV). Animal sacrifice was not new in the days of Noah. Even Abel sacrificed an animal to God. Animals sacrificed to God were supposed to be “clean” animals. Therefore, Noah understood the concept of clean and unclean animals. Seven pairs of each clean animal, male and female, were to enter the arc. And only one pair of each unclean animal, male and female, were to enter the arc. The clean animals were going to be used for various activities for which it was necessary for them to increase in quantity exponentially. They would be used as animal sacrifice to God, and as food for humans. Up to this moment in the history of humankind, humans were vegetarians. But this order was about to change; humans were about to start eating animal flesh as meat. However, not all meat was good for human consumption. Therefore, God had made the clean animals to be good for human consumption while the unclean animals were not good for human consumption.

God said to Noah: “Seven days from now I will send rain on the earth for forty days and forty nights, and I will wipe from the face of the earth every living creature I have made” (Genesis 7:4). For 120 years, Noah had preached the message of repentance to his people, urging them to repent (Genesis 6:3). His message to the world was as clear as a child could comprehend. He did not hide God’s plan to destroy the world from his people. Yet, they refused to heed to the message of love that called them to repentance and salvation. They doubted the possibility of water coming from the sky and mocked Noah and his family as being delusional and insane because of their message. Beasts, birds and creeping animals hearkened to Noah’s voice and voluntarily walked inside the ark while humans, the most outstanding of God’s creation, looked at Noah with laughter and mockery.

For seven days, Noah and his family were in the arc. For seven days, God withheld the waters from coming down from heaven. Should any of the people outside of the arc had believed Noah’s message, Noah was ready to open the arc so that they could come in. God extended to sinners seven extra days of His grace. Indeed, He does not have pleasure in the death of the wicked (Ezekiel 18:23). Unfortunately, the sin-infested humans rejected God’s plea to repentance.

Therefore, after the seven days, the floodwaters came on the earth (Genesis 7:10). “And rain fell on the earth forty days and forty nights” (Genesis 7:12). “All the springs of the great deep burst forth, and the floodgates of the heavens were opened” (Genesis 7:11). Let’s analyze the statement “the floodgates of the heavens were opened.” This type of rain is not like the rain we experience today. It was more than that. In the account of creation in Genesis chapter 1, we are told that the entire earth was filled with water. Then God created a vault between the waters so that the waters above the vault went up while the waters below the vault formed the bodies of waters we see on earth. God called the vault sky (Genesis 1:7,8). Up above the sky was water (maybe in liquid form or in gaseous form, but it was still water). This water is what fell from heaven for forty days and forty nights. However, the flood water that destroyed the earth did not only come from the sky. The springs of the great deep also bursted forth so that the water under the earth also came to the surface of the earth (Genesis 7:11). There was so much water that it covered every mountain on earth so that every living thing (except for fishes) that were outside of the arc perished. There was so much water that every mountain on earth was totally covered with water for more than fifteen cubits (Genesis 7:20-NIV). With the exception of the lives in the arc and the fishes, all lifeforms on earth perished. “The waters flooded the earth for a hundred and fifty days” (Genesis 7:24-NIV). Fortunately for the human race, Noah and his family were righteous enough to embrace Jehovah's gift of salvation.