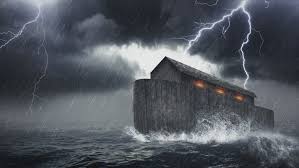 (Please click on chapter to read from the Bible)

In this chapter, we learn that God actively sent a wind over the earth so that the water could recede faster. After the forty days and forty nights of rain, both “the springs of the deep and the floodgates of the heavens had been closed” so that: “the rain had stopped falling from the sky” (Genesis 8:2). At the end of the 150 days, which was the seventeenth day of the seventh month of Noah’s 600th year, the ark came to rest on the mountains of Ararat. Please notice that Noah’s birth day is used for the chronology of the calendar in the flood narration. Also notice that the Jewish calendar has thirty days in a month. Every timeline narration in the Bible uses the thirty days in a month calendar.  However, the accuracy of the timeline of the flood narration is as credible as the appearance of the sun on a summer morning. Please read the chat  that I have prepared below.

The water continued to recede. On the first day of the tenth month, other mountains which were lower than the mountains of Ararat (where the ark rested) became visible to Noah when he looked in the window of the ark, because the water had receded beyond the tops of the mountains. Forty days later, which was the tenth day of the twelfth month, Noah opened the window and sent a raven and a dove. Concerning the raven, the Bible says that Noah “sent out a raven, and it kept flying back and forth until the water had dried up from the earth” (Genesis 8:7-NIV). The dove, however, was sent every week until it did not return. It was sent three times: The first time, it returned having no place to rest. The second time, it returned with an olive leaf in the beak. And the third time, it did not return because it had a place to rest outside of the arc, and it had food to eat.

Noah waited six days, and then removed the covering from the ark. Then, he saw that the surface of the ground was dry. This happened on the first day of the first month of Noah’s 601st birth day; that is on Noah’s 601st birthday, he removed the covering of the ark. Yet, Noah did not come out of the ark until God told him to come out with every living thing in the ark. “By the twenty-seventh day of the second month the earth was completely dry. Then God said to Noah, ‘Come out of the ark, you and your wife and your sons and their wives’” (Genesis 8: 14,15,16-NIV). Thus, Noah spent 377 days in the ark before coming out. For 370 days, there was flood on the earth (Please see the chart below).

When Noah came out of the ark, he built an altar to Jehovah and sacrificed some of the clean animals and clean birds as burnt offerings on the altar. Noah worshipped God for saving humanity. His sacrifice was accepted before God so that God said in His heart “Never again will I curse the ground because of humans, even though every inclination of the human heart is evil from childhood.” And He also said: “And never again will I destroy all living creatures, as I have done” (Genesis 8:21-NIV). God said He would not curse the ground again because of humans. But when did God curse the ground? In Genesis chapter 3, God said to Adam “Cursed is the ground because of you; through painful toil you will eat food from it all the days of your life” (Genesis 3:17-NIV). During the flood, the ground reached the climax of its curse: All plantations were utterly destroyed by the flood. God has not uttered another curse on the ground again. However, the first curse still persists; we still toil before we eat food from the ground.

There’s a day coming that the curse on the ground will be melted away with fire. Peter, the disciple of Christ, said: “But the day of the Lord will come as a thief in the night; in the which the heavens shall pass away with a great noise, and the elements shall melt with fervent heat, the earth also and the works that are therein shall be burned up” (2 Peter 3:10-KJV). Since the earth was cursed because of sin, the curse together with sin will be wiped away with fire. Peter said that: “everything will be destroyed in this way” (2 Peter 2:11-NIV). After the cleansing of sin from the earth, the earth will be renewed. Therefore, “We are looking forward to a new heaven and a new earth, where righteousness dwells” (2 Peter 3:13-NIV). God Himself has said: “See, I will create new heavens and a new earth. The former things will not be remembered, nor will they come to mind” (Isaiah 65:17). God destroyed the earth and the sin in it with water. But sin has prevailed and has waxed stronger over the ages. This time, God is about to destroy sin with fire so that only righteousness shall prevail. Then will the earth be truly lifted off its curse.

God also said: “And never again will I destroy all living creatures, as I have done” (Genesis 8:21-NIV). Doesn’t this statement contradict the idea of God destroying the earth with fire? Actually, it does not. God said that He would not destroy ALL LIVING CREATURES. He made this statement when only eight people out of the population of an entire planet were saved from the flood. God does not have pleasure in the death of the wicked (Ezekiel 18:23). Therefore, He was not happy that only eight people were saved. When He said that He was not going to destroy all living creatures, He meant that the next time there is destruction of a planetary proportion, He would save as many people as will allow themselves to be saved. And that definitely will be more than eight people. John gives as an idea of how many people will be saved from the fire in the Book of Revelation: “After this I looked, and there before me was A GREAT MULTITUDE THAT NO ONE COULD COUNT, from every nation, tribe, people and language, standing before the throne and before the Lamb. They were wearing white robes and were holding palm branches in their hands” (Revelation 7:9-NIV). Therefore, God is truly not going to destroy all creatures. Even though a lot of people will lose their lives, a great multitude that no one could count will be saved from the destruction that is to come.

From the story of Noah’s flood, we can learn that God warned the people through Noah that He was going to destroy the world with water, and He destroyed the world with water. Noah and his family who hearkened to God’s voice were saved from the flood. The flood water reduced the magnitude of sin on the earth, but it did not completely eliminate sin. Today, God is warning people that He is going to destroy sin and the world with fire. As He did with the water, so shall he do with the fire. However, if we, like Noah and his family, hearken to the voice of God and repent from our sins, He will save us so that we will become part of the multitude that no one could count who were wearing white robes.

CALENDAR OF NOAH’S FLOOD: Please note that Noah’s birth day was used for the chronology of the calendar.